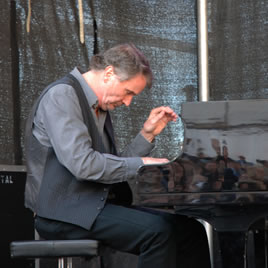 Born in 1944 (in Sweden) Bo Gustav Stenson, better know as Bobo Stenson, the baby of the family, receives his first musical inspiration from his family. His father and mother play, respectively, piano and violin. His two brothers and sister (also respectively) practice the drums, trombone and cello.
As a child, Stenson studies classical piano at the home of Werner Wolf Glaser, (a German-born Swedish composer, conductor, pianist, professor, music critic and poet (1910-2006), who becomes his most important teacher and mentor for 15 years.

When, however, his student becomes interested in jazz Mr Glaser, who had played some jazz in his youth, encourages Bobo. (Bobo will always remain true to classical music. He still enjoys playing piano music, including J.S. Bach, in order to hone his technical skills).
In his early teens, Bobo comes into contact with other like-minded enthusiasts at his hometown of Västeras, where he plays a lot together with bass player Ivar Lindell and trumpeter Lars Färnlöf. They look around for places to jam and transport a piano on a bicycle barrow, sometimes hauling it up several flights of stairs just to be able to play.

Whilst still at grammar school, he meets (and is spotted by) Scandinavia’s greatest tenor saxophonist Borje Fredriksson, who during his short career (he died in 1969 at the age of 31) has a major influence on the development of modern jazz in Sweden. Bobo agrees to join Fredriksson’s innovative band together with Palle Daniellson on bass and Frederik Norén on drums. This entails frequent visits to Stockholm, and before long he becomes a familiar face at the Gyllene Cirkeln (the famous Golden Circle at which Ornette Coleman made two of his greatest recordings).

Having passed the university entrance exam, Stenson sets off for Paris, at that time the Mecca of jazz. Within two days and for the next six months, Bobo – surrounded by American and European musicians, – performs every single day/ night at the legendary jazz clubs of yore, such as the Bluenote, Le Chat qui Pêche and the club run by Altevia Edwards (better known as “Buttercup”) who claimed to be Bud Powell’s wife.

Thereafter Bobo sets off on tour with a German company centred around vocalist Inge Brandenburg (1929-1999) with whom he makes his first recording in Berlin in 1965.

Around the same period Stenson moves to Stockholm. There he plays with local Swedish giants, such as the drummer Rune Carlsson and tenor saxophonist Bernt Rosengren. And the international saga continues: when American bass player Red Mitchell (1927-1992) moves to Sweden in the late 1960s, he puts together a trio with twenty–four year old Bobo and drummer Rune Carlsson. They tour in Europe.

The album One Long String recorded during a visit to Paris, (on which Stenson is Mitchell’s co-writer for the original material), is regarded as the first album to do justice to the innovations brought by Red Mitchell to his adored instrument.

Other eminent musicians, such as tenor saxophonist Dexter Gordon (1923-1990) and Belgian jazz legend Toots Thielemans also invite Bobo to play alongside them.

At the beginning of 1970, Stenson tours Africa with the American tenor saxophonist Stan Getz (1927-1991). Musicians such as tenor saxophonist Sonny Rollins, vibrafonist Gary Burton, and vocalist Sheila Jordan, also passing through Scandinavia, are keen to get Bobo on stage with them.

In 1971, Bobo is involved in Jan Garbarek’s Sart, one of the very first recordings of Manfred Eicher’s German record label ECM.

His involvement with the Swedish Radio Jazz Orchestra, allows Bobo to work with various famous names, to name one, George Russell (pianist, conductor, arranger, 1923-2009). The latter invites Stenson to take part in the “live” recording Listen to the Silence commissioned by the Norwegian Cultural Fund.
[Years later (in 1980) Russell invites Bobo to be the soloist for a live radio broadcast entitled Living Time with the RAI big band in Venice and Rome.]

Stenson tours with the American trumpet master Don Cherry (1936-1995), also known as one of the pioneers of world Music. They become more closely associated in many contexts throughout the trumpeter’s long period of residence in Sweden, until Cherry’s death.

With Jan Garbarek, Stenson also co-leads the immensely popular quartet (with Palle Danielsson and Jon Christensen) that records two ECM albums: Witchi-Tai-To (initially intended as Stenson’s trio album) and Dansere. In spite of their commercial successes, that were the equivalent of a hit and nowadays count as classics of the era, this famous collaboration unfortunately ceases.

In 1974, as Keith’s Jarret’s American quartet is winding down, he begins another phase of his development, forming a quartet featuring the same musicians: Garbarek, Danielsson, and Jon Christensen. Despite this, Danielsson and Christensen – who have already played together with Stenson in various bands since the mid-sixties – continue to share the stage and record with Bobo under different auspices. Stenson continues to concentrate on developing his Swedish projects, in particular Rena Rama (with Lennart Aberg on saxes and flute, initially Palle Dannielsson on bass, and several drummers including the amazing Leroy Lowe (1944-1999), who loved Stockholm so much that too he settled there).

Rena Rama who unites folk music and jazz, gathering tunes from Africa and from eastern Europe, becomes one of the most important joint-led Swedish bands whose discography includes the Japo album Landscapes. For several years Stenson is involved with Oriental Wind, the ensemble formed by the classically-trained Turkish percussionist Okay Themiz, who has a strong interest in jazz and who adopted both Sweden and Finland as second homes. Playing ethnic and world music this group goes on to create a long tradition of interaction with the founders Ramamani (voice) and husband Mr. Mani of the Karnataka College of Percussion (KCP) from Bangalore, India.

In the mid 1980s, Bobo starts to focus on his trio, this time, with Swedish double-bass player Anders Jormin and drummer Rhune Carlsson. The album Very Early“ recorded in 1986 and originally released in Japan, is re-issued in 1997.

In the late 1980s, Stenson’s profile begins to rise even more due to his association with the American cult saxophonist Charles Lloyd whose return to music after a self-imposed absence of 20 years is one of the most significant jazz events of the 1990s. Whilst touring extensively with Lloyd in the U.S. and Europe, Stenson appears on Lloyd’s first five ECM albums: Fish Out of Water (1990), Notes From Big Sur (1992), The Call (1993), All My Relations (1995) and Canto (1997).

During one of these recordings, on hearing about the collaboration with Polish trumpet player Tomasz Stanko, the producer M. Eicher convinces Bobo to bring Stanko back into contact with ECM. This leads to three extraordinary ECM albums by this trumpet player: Matka Joanna (1995), Leosia (1997) and Litania (1997).

In the same period Stenson goes on liberating the trio concept with Anders Jormin on bass and Jon Christensen on drums. Their recording Reflections (1993, ECM 1516) is an unprecedented success, winning both the Swedish Grammy and the Golden Record Award, a first in the music world. Mindiatyr written by Stenson and also the closing piece on Reflections, becomes part of the contemporary repertoire of Azimuth on their album How was it Then… Never again (ECM 1538).

Having held onto the sheet music of Borje Fredriksson for over 25 Years, Stenson, together with bass player Palle Danielsson, drummer Frederik Norén and saxophonist Joakim Milder, put together the quartet Sister Maj’s Blouse, which releases various albums in order to keep Borje Fredrikkson’s compositions alive.

The trio recordings War Orphans (1998, ECM 1606) and the double CD Serenity (2000, ECM) (with Anders Jormin on bass and Jon Christensen on drums and recorded at an extraordinary site in front of HageGarden) place Stenson firmly among the greatest living jazz pianists. The recordings, (including excellent compositions by Stenson), become albums of the month in publications around the world.
Meanwhile, in response to a delightful concert in Antwerp a second solo album is recorded.

At the release of the trio album Goodbye (2005), (this time with Paul Motian in the drummer’s seat), Stenson tours the United States once more, playing seven cities in seven days. In 2005 he receives the Swedish royal medal Litteris et Artibus, awarded for important contributions to culture, especially music, dramatic art and literature. Stenson has been referred to as “the greatest living jazz pianist born outside the United States. He is a poet of the first order. Stenson’s spontaneous melodic and harmonic discoveries, his trajectories and distant departures, arrive at a breakthrough to lyricism that, once found, sounds like it has always been there” (JazzTimes, 2005, Thomas Conrad).

A year later Stenson wins the European Jazz Prize, Musician of the Year.

In 2008 the trio releases a new CD Cantando: this time with Jon Falt on drums and Anders Jormin on bass. The album is lauded by the international press, and in 2009 receives the Swedish award for best jazz music. The trio criss-crosses Europe, and appears at major jazz festivals.