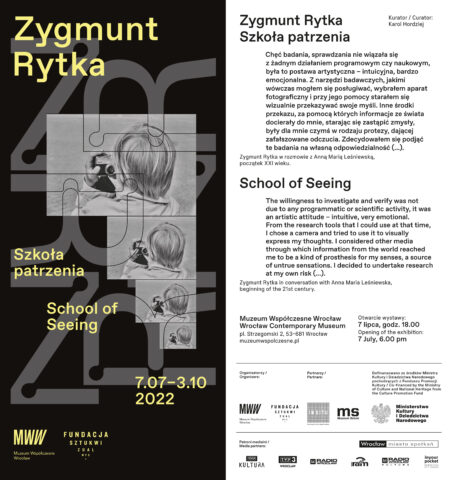 “As the late Jurek Busza once said, I was running in several directions at the same time. I subject my sensitivity or intuition to constant daily listening, and I choose whatever seems to be controlling my nature at the moment. Some of my works are based on one photograph, they are a commencement whose continuation is as yet unattainable. In other words, either I am going towards something or something is going towards me, something that speaks to me most powerfully.”

From the day of his artistic debut with the “Time Intervals” exhibition at the Remont Gallery in Warsaw in 1974, Zygmunt Rytka (1947–2018) continuously subjected the surrounding reality to artistic research. His main tools were a camera, a film camera and a video camera. This research, however, was not scientific or theoretical – it was a creative attitude based on intuition and constant dialogue with reality. This process resulted in the currently discovered archive containing over 40,000 photographs on negatives and about 1,000 original photographic prints, over a dozen films and video works, as well as spatial objects and installation documentation.

Rytka’s creative path extended over five decades of artistic practice, during which he not only created numerous projects, but also entered into creative relationships with the artistic community. As he would explain, some of the key events in his artistic biography were connected with meetings with older neo-avant-garde artists, especially Marek Konieczny, Krzysztof Zarębski and Józef Robakowski. Thanks to them, his creative sensitivity as a self-taught photographer was exposed to conceptual thinking about art and formal experiments in the field of photography and film. However, his work from the very beginning was clearly marked by a search for something beyond the avant-garde form. It seems that apart from the need to develop his own artistic self-awareness, it was a search for a personal relationship with the world in its various manifestations, supported by experience and emotions.

The “Zygmunt Rytka. School of Seeing” exhibition is conceived as an atlas of various strategies of observing and researching reality that can be found in Rytka’s work. It features more than a dozen original series from the 1970s, 1980s and 1990s, mainly connected with the themes of perception, cognition and media manipulation and representing a number of different artistic practices. In his work, Rytka would sometimes cast himself as a philosopher, looking for order in the chaotic arrangement of stones in the Białka River; at other times, he would become a karate fighter in a golden suit and white gloves, or disappear behind the lens to spy on tourists taking pictures of one and the same attraction. He challenged himself with the documentation of the fake media coverage by directly photographing the TV screen in the late communist era; he also documented press pages containing announcement about the imposition of censorship. There were works in which, having adopted the pose of Rodin’s “Thinker”, he photographed himself against the background of nature, becoming as if a bridge between the worlds of culture and nature.

An important element of many of the featured works is the presence of the artist himself, which emphasises his personal and engaged attitude to the addressed topics. Rytka developed some of his concepts simultaneously in the form of photography and video, which resulted in parallel works, often supplementing the selected topic from slightly different perspectives. Access to previously unpublished materials in his archive, especially photographs on negatives, shows a more complex process of developing the concepts behind the individual series, which sometimes lasted many years and resulted in a network of images built around a given idea.

Zygmunt Rytka’s work, which is currently being rediscovered, turns out to be extremely topical, especially in the context of the global turmoil and revolutions as well as the ongoing power struggles in the ​​media: on the radio, television and in Internet channels. Artistic strategies developed by Rytka in the times of the People’s Republic of Poland seem disturbingly relevant in the third decade of the 21st century, and it is definitely worth taking a closer look at them.

Co-financed by the Ministry of Culture and National Heritage from the Culture Promotion Fund.